And I saw when the Lamb opened one of the seals, and I heard, as it were the noise of thunder, one of the four beasts saying, Come and see. And I saw, and behold crickets: and crickets sat on me; and crickets rained upon my head: and crickets went forth defecating, and to defecate. 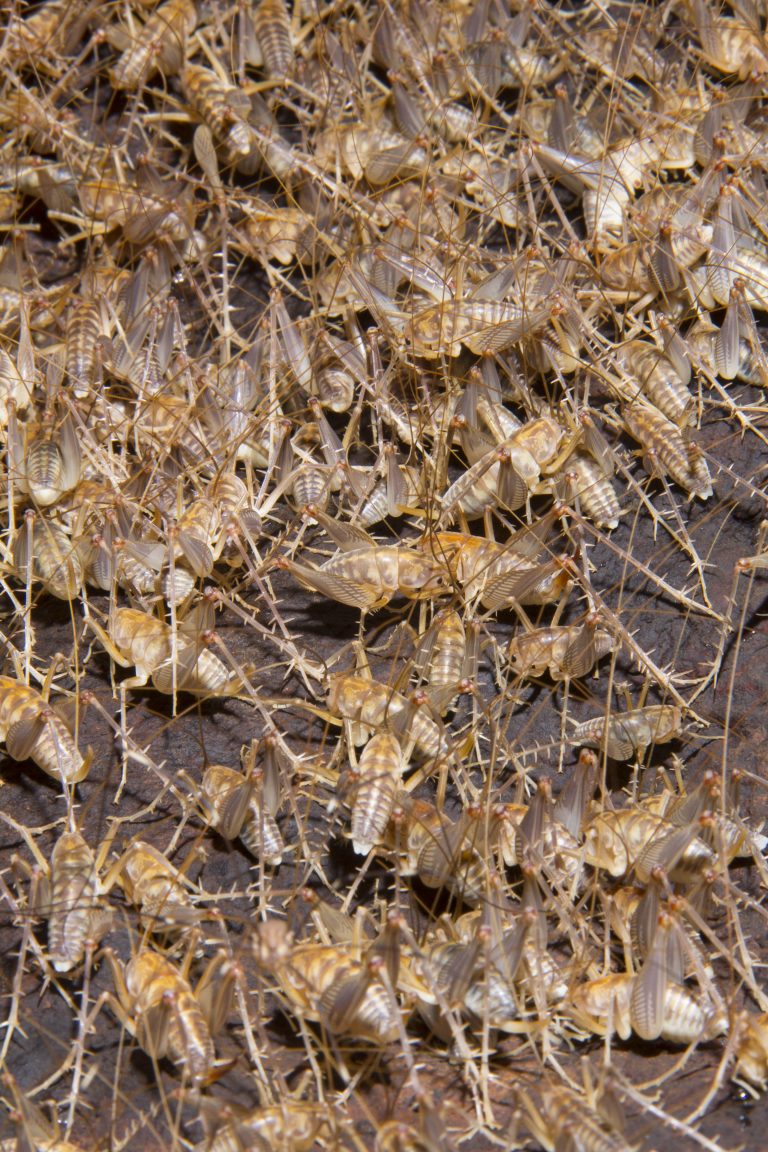 Geary Schindel needed help assessing eight known caves on a private ranch in Medina County. (Yes, once again, it all started with Geary.) Most of them were rumored vertical pits, and he easily gathered up San Antonio and Austin cavers eager for the chance to drop into unexplored vertical caves.

There were many adventures during this trip, like Michael Gibbons getting run up a tree by a 260 pound wild hog (twice…yes, twice); the subsequent search parties; Geary Schindel leading his group astray because he doesn’t know how to read a GPS; and everybody skipping the first cave because it was “only horizontal” but turned out to be the biggest and most decorated cave on the ranch (that we know about so far).

But I’ll let those folks weave their own tales. This trip report is about one of the unnamed caves on the ranch, which I dubbed Cricket Crap Cave for reasons which will soon be apparent.

After leaving other teams to explore and map other caves on the ranch, the ranch owner led us to a pit on the side of a small hill. He said the cave opening has grown in size since he’s known about it. It must have been really small initially because even with the “growth” the entrance is only about two feet in diameter. After the opening, the pit bells very slightly and then narrows again near the bottom. It looked about 15 feet deep and probably climbable without rope. However, the walls were covered with a slick moss, so we decided to rig a rope for safety.

Gary Donham started putting on his vertical gear while some other cavers wrapped the base of a nearby juniper tree about 47 times with a rope. I hiked back to the cars, got my camera and vertical gear, came back, and put my gear on. In all that time, Gary still hadn’t sorted out his vertical gear, so I cut in front of him and hopped on rope.

Nothing eventful on the way down. There were huge clusters of harvestmen in the first few feet of the entrance. About halfway down there was a tiny, foot-high passage that curved around a corner.

At the bottom, the cave became a narrow fissure about four feet high. One direction pinched off after a few feet. The other direction showed passage going slightly downward. The top was too narrow to pass through, so I laid down on the soft floor and crawled in head first. However, even at the floor level, it’s so tight that I had to take off my helmet and lie on my side to fit through. After that, it opened into a small, narrow passage just tall enough to kneel in. I looked around…and that’s when it started raining crickets.

Literally every square inch of the passage had crickets on it. When I barged into their underground lair with my light ablaze, all the crickets started jumping off the walls. The next few minutes were akin to the Battle of the Hornburg (a.k.a., Helm’s Deep)—a nonstop onslaught of creatures attacked me. My helmet was still off from the squeeze, so they flew into my hair and onto my face. I couldn’t even see because there were so many of them, but I could feel them landing all over my body and arms and legs. They piled below me, and I could hear them crunching under my knees as I tried to move forward, away from the entrance constriction. I laughed at the absurdity of the situation, only to have some land near my mouth, so I quickly muffled my laughter.

Eventually the torrential downpour of crickets subsided, and all the crickets huddled en masse at the top of the passage, forming layer upon layer of writhing antennas and spiky legs right above my head.

In this respite from the storm, I could finally see that I was in a passage about five feet high, two feet wide, and ten feet long. At the end of the room was a small section of formations. There were some dark brown stalactites on the ceiling, and along the right wall were crystalline formations, including a few more stalactites, a cracked column, and some flowstone.

Across from the formations, the passage continued to the left, but shrunk down to about two feet high and four inches wide with solid bedrock on either side. Beyond that, it appeared to open slightly and continue to the right. On the other side of the restriction, there was a grey blur as a little mouse darted across the passage.

I heard Gary finally starting down the rope. I opened my camera case in the narrow passage and took some photos of the crickets, but my back kept itching. As I leaned forward to scratch it, my headlamp illuminated the floor, and that’s when I saw that the soft dirt was speckled with fire ants. Fortunately, I was wearing a pair of CaveSkinz pants that were able to provide some protection from the ants despite being so worn that CaveSkinz proprietor Ron Rutherford recommended burning them. However, once the fire ants got above the waistline, they were stinging my back. I made sure to kneel instead of sit on the soft floor to keep some distance between the ants and my fleshy midsection.

That’s when I thought, “Shit!” Not the exclamation, but the noun. “It’s cricket shit!”

About this time, Gary popped his head through the restriction. He was shirtless, an unfortunate influence of hanging out with Tom Rogers too much. (If you don’t know Tom, he usually caves in baggy shorts and boots and that’s it—no shirt, no underwear. Not a pretty sight when you’re caving below him and look up.) So here we are, Gary and I alone, on our knees in this confined area, the high humidity starting to make Gary’s naked torso glisten, his gray chest hair all wet and matted. I know what you’re thinking…but no. Someone somewhere in the world might think Gary is sexy, but that person isn’t me. (Sorry, dude.)

I snapped some pictures of the crickets with Gary for scale (trying to keep him restricted to the shoulders up), and then focused on the formations in the back. That little mouse showed himself again then quickly darted back into the depths before I could snap a photo of him. Shame. He was a lot more photogenic than Gary.

At this point, the folks on the surface were wondering what we had discovered. All they could see was that we both disappeared from view at the bottom of the pit, so there was obviously more passage than they could see. We jokingly called up and asked for another rope—at least 50 feet. Maybe 100 feet just to be safe. And bring my extra batteries and water. Does anyone have a wetsuit? I think they figured us out pretty quick because no one got off their ass to trek back to the cars for gear.

Gary had pretty much seen everything the cave had to offer at this point, so he headed back through the squeeze and started up the entrance climb. I snapped a few more pictures and started to put my camera away. That’s when I noticed some little brown specks on top of the foam in my camera case. I thought it was maybe some dirt that I kicked up, but the brown specks were very random across my case, not like a spray of dirt. And the specks were all relatively uniform in size, about a millimeter or two in diameter, and didn’t have any other fine dirt particles around them. And they were sticky.

That’s when I thought, “Shit!” Not the exclamation, but the noun. “It’s cricket shit! These crickets are crapping all over me!” And if there’s that much cricket crap in my camera case in the very short time that I had it open, I realized this dirt floor that I crawled across and have been sitting in and kneeling in is probably all cricket crap. Nasty!

I grabbed my harness off the ground. It was at the mouth of the restriction, so both Gary’s and my emergence from the lower constriction had smushed it into the cricket crap. I brushed it off as best I could, and put it on, straps grinding cricket crap into my CaveSkinz (at this point I’m thinking Ron’s suggestion to burn them is sound advice).

I tried to take some photos of the entrance from below, but my camera lens fogged up. Odd because it was August in Texas, which means about 118°F on the surface, so my camera should have been much warmer than the cool cave and not prone to condensation. I guess even my warm lens was no match for all that fresh, steamy cricket crap.

Gary freeclimbed out. I did, too, but I attached one of my ascenders to the rope as a safety. I’m glad that I did because the cricket crap that was smeared all over my boots combined with the slick moss made the climb out a little tricky, but the ascender kept me moving upward.

Once on the surface, I headed back to the car and cleaned up the best I could (Pam, I still owe you three boxes of handy wipes). I didn’t want to put on my street clothes yet because we still had a few caves to explore, so I set about cutting up a trash bag to protect my seat covers that were already protecting my actual seats. A couple of cavers made fun of me for protecting my seat protectors. They could laugh all they wanted. I knew what was smeared all over my clothes. It wasn’t mud. It was cricket crap. 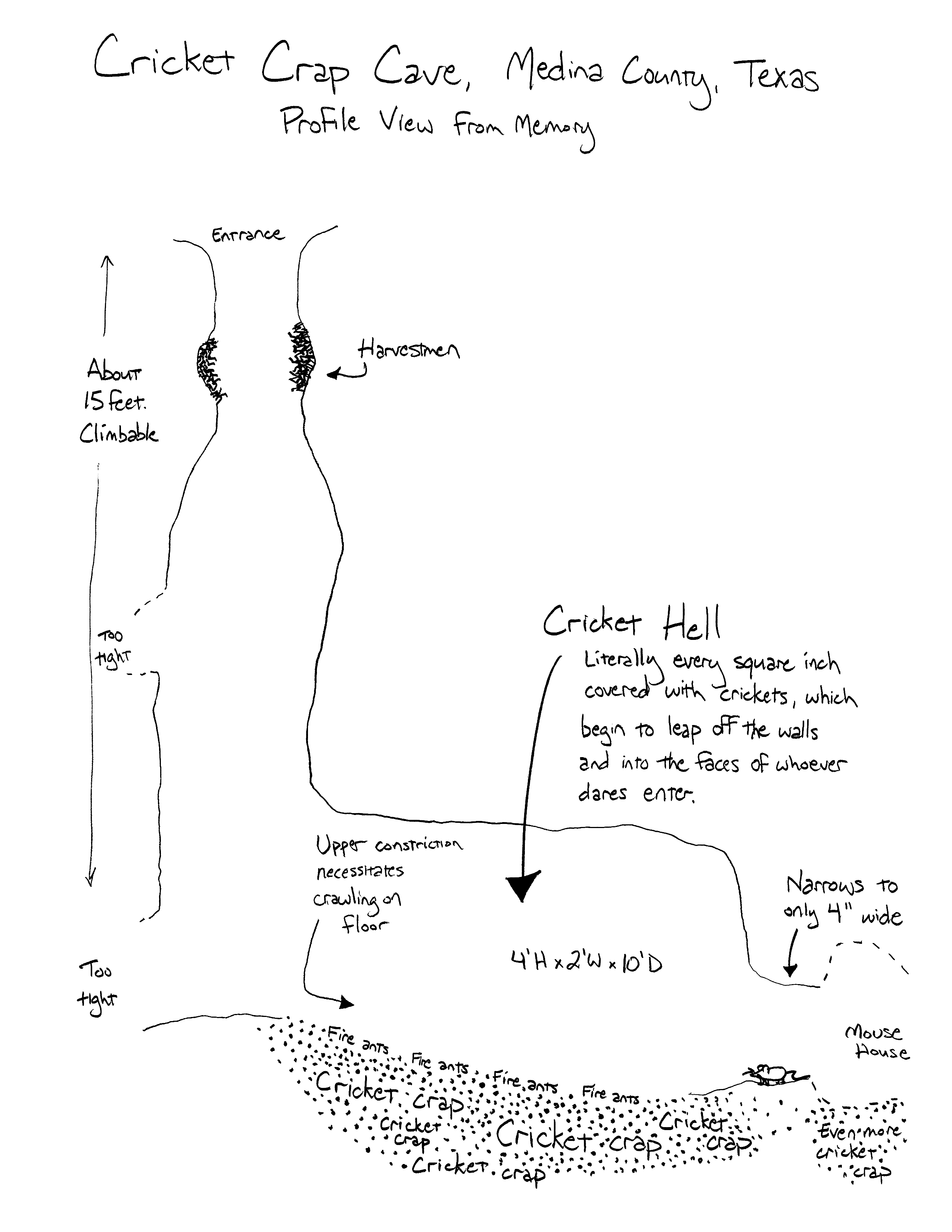 I claimed that my award-winning Adam Wilson’s Cave map was the first and only cave map that I have ever drafted. However, I forgot about my previous experience drafting this cave map back in 2016. It’s not as fancy as my Adam Wilson map, but it does a really good job of documenting this cave. Maybe another award-winner. And that mouse is super cute, right? Sure to win me audience favorite this time over that damn Collin Strickland.

Cricket Crap Cave is a great cave, filled with trogloxenes and a variety of formations. It has everything: vertical for those who want to get on rope; tight, squeezy passages for those looking for a true caving experience; a formation room; and abundant wildlife, both in the cave and on the surface—hopefully Michael Gibbons will write an article about his wildlife experiences there. I highly recommend Grottos across Texas contact Geary Schindel to schedule a trip. (Apologies to Geary for the onslaught of visitation requests this article will undoubtedly inspire.)

And bring a change of clothes when you come.

This article has also been published in: 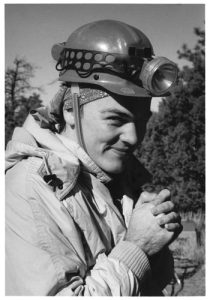